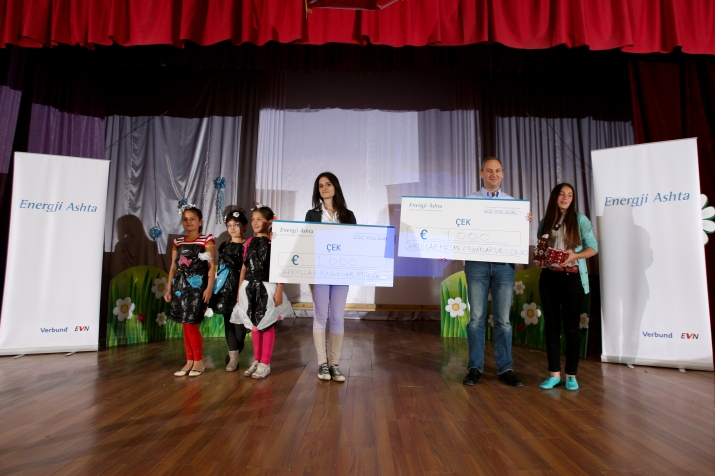 Mjedë/VauiDejës, May 28, 2015
May 28 marked the finalization of a very comprehensive and ambitious environmental project "I am cool, I do not litter" initiated by Energji Ashta with the collaboration of the local schools in Mjedë and Vau i Dejës. Raising awareness toward waste collection and waste management have been the subjects of this initiative which has been extended over the last couple of months. Both communities living along the River Drin flow are witnessing what could be considered a "warned ecological catastrophe" due to the heavy pollution encountered in the river. In the award-giving ceremony today Peter Stelzer, managing director of Energji Ashta, thanked both schools for their participation and gave out symbolic cheques worth 1000,-- Euros each that will be used for fulfilling infrastructural needs of the schools.
Energji Ashta is the last hydropower plant in the cascade of the River Drin. Built with a state of the art technology, the more than 52 MW strong hydropowerplant has contributed in preventing the flow of 162.25 tons of waste floating in the River Drin and subsequently ending in the Adriatic See only for the months of January- May 2014. The waste accumulated in the trash rack machine right before the water is processed in the turbines, is composed of different items including dead animals from the nearby farms. Seizing the gravity of the situation especially considering that the contaminated water is used also for irrigating family yards and also for other domestic purposes, Energji Ashta felt the responsibility to start a project that would inform the inhabitants of the surrounding areas about the risks that could possibly affect their health.

Sustainability day
Today Energji Ashta was happy to participate to the finalization of the project "Let’s keep our commune beautiful!" being organized for the second consecutive year. Pupils from the schools of Mjedë and Vau i Dejës concepted a presentation day where they shared in front of their parents and friends all environmental issues that concern their day to day life. Each school preapred a presentation regarding the impact that the waste in the respective areas where they live has on the environment and health.
During the preparation phase of the presentation, the children led by their teachers volounteered in cleaning severely waste impacted areas sorrounding their schools. Highly motivated pupils from the Mjed a High School even turned one of these areas into a recreation spot where they reused various materials found abandoned along the embankement of the River Drin to create lounging stools, umbrellas and other useful tools.
During the award cremenony, Peter Stelzer, managing director of Energji ashta emphasized the importance of these projects for both the community and EnergjiAshta. He said „I am very proud to be here today and to have supported for the second consecutive year both schools in giving the right importance to these very sensitive issues . Energji Ashta pays a high attention to social and environmental standards and strives to share these standards also with its neighbors”.
During the ceremony, Peter Stelzer awarded both schools with the symbolic cheques worth 1000 Euros each that will be used for fulfilling infrastructural needs of the schools.

How it all started
This activity crowned a more extended involvement both from Energji Ashta and the respective schools. Back in November 2013, the company intermediated the participation of the corresponding biology teachers from each school in an environmental workshop organized from Kultur Kontakt Austria with the participation of different schools from all over the country. In February 2014 a biology expert was engaged from Energji Ashta to hold environmental awareness lesson in both the schools of Vau i Dejes and Mjede. For two weeks pupils learned about health threatening wastes, waste management,recycling and other related issues. During the second phase of the project, children from both schools, based on the information acquired during the environmental lessons, started preparing environmental awareness drawings, new objects from recycled materials, have cleaned the main streets of the villages, have distributed awareness brochures among the inhabitants and carried out other creative activities. During this phase, EnergjiAshta has provided all the necessary equipment and basic materials for the implementation of the activities, starting with stationeries, gardening tools, t-shirts, designing and printing brochures and others. Again this year the project saw an environmental expert who spent time with the pupils in discussing local oriented problems and solutions.