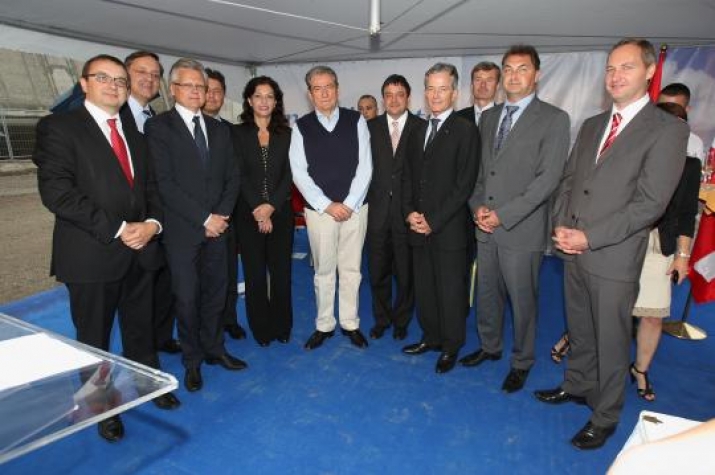 power plant worldwide. After only one year of construction works, Ashta 1 powerhouse

is already revealing its full magnitude. This was celebrated today in a ceremony with

with the progress reached so far. While the concreting on the sill level of Ashta 2 has just

been completed and the placing and concreting of the draft tubes is in progress, the Ashta 1

powerhouse is already revealing its full magnitude. The finalisation of the main building of Ashta

1 was achieved in late June this year. Up to now, more than 40.000 cubic meters of concrete and

more than 3.000 tons of steel have been used within almost half a million working hours on site.

largest town. In the process, innovative measures are being taken on the River Drin: Hydro-Matrix

of hydro energy. Once commissioned HPP Ashta will be the largest hydro-matrix power plant of

In future, 240 million kWh of electricity will be produced in Ashta. In this way, 100,000 Albanian

households can be supplied with electricity. More than 200 million Euro will be invested. From

2012, the electricity generated will be fed into the Albanian 110-kV grid.

pollution saving around 114,000 tonnes / year CO2. Furthermore, fish will be able to swim from

hydroelectric power station in Albania at all.

stakeholder dialogue as part of the CDM Management and monitors it closely. HPP Ashta was

meetings are repeated on a regular basis.